This extract comes from a text that combines many of my interests throughout the years and it marked a turn in my own theoretical writing as it allowed me to break away from conventional references and ways of reasoning.

(…) I would now like to keep the white and black of Barcelò’s albino portraits, in order to take a look at ‘Manifeste incertain 2’, the extraordinary book by Frédéric Pajak (Pajak 2013), which follows Walter Benjamin’s journeys from the North to the South of Europe, and his stays on the island of Ibiza. Apart from its evident closeness to the theme of the South as exile, and to the underlying constant reference to exile in general through the figures of James Joyce and Samuel Beckett, this absolutely singular book unveils, as it performs them, two major characteristics of the imaginary South: – juxtaposition – sharp contrasts. First, juxtaposition is the making of the book as it brings together large drawings, underneath which comes a usually short text. Image and text are not always related in a strictly logical, explicative, or illustrative way. Most often, they are juxtaposed in a way which creates poetic resonances throughout the book. Usually, be it in a cabinet de curiosités or in poetry, juxtaposition is the companion of fragmentation. And indeed, matching Benjamin’s own preferred mode of thinking and writing, Pajak’s book functions as an irreverently assembled collection of fragments, which are all the more poignant for being just that.

The second feature of the South which is clearly ‘embodied’ in this book is the sharpness of the contrasts. Like other graphic books, this book is in black and white, but most of its parts play up the contrast between full light and darkness, intense sun and very deep shade. The black-clad women in Sicily (which are referred to with nostalgia in the text), the blinding white of the houses, the immobility of the paths in contrast to the presence of the sea, which is immutable, all contrive and manage to give a sense of past and future merging into the present, an inescapable, as it were, present (which, all along, is a present one has arrived at) and of the porous limits between the external surroundings and the internal musings of the writer and his characters as well as of the conjoined threat of death and Eros. Thus, under the drawing of an ancient temple and the arid landscape that surrounds it, a text says: ‘The atrocious marvels of creations are marvellously atrocious precisely because they do not originate in creation. They are’ (Pajak 2013: 91). And inscribed on the sun clock of the beautiful cathedral on Ibiza, the phrase: ‘Ultima multis’.

An echo of that same immobility in time, of that hanging threat of death at midday, of the admission of the lack of control, can be found in a poetic text called [South] ([Νότος]) by Evgenios Aranitsis (2016), a Greek poet and essayist, whose work combines an extraordinary capacity of reflexion with deeply moving language. In [South], he deploys the contrasting rhetoric between North and South in a poetic key, playing with the topoi of the North and the South, and indeed giving an account of what the South is, by contrast to the North, on the occasion of an invitation to write on this but also in the context of the generalised, political demands for accountability: ‘the north is vast and iron, mercury and nitre belong to it/the south is limited, deep and secret, and gold and brass belong to it’. Or, ‘because it holds that you PAY for your errors in the north, whereas you owe them and one owes them to you in the south’; ‘in the north, summer is the object of desire, whereas in the south it constitutes both an object and a cause’; ‘the north is chronic/the south is eternal’, which reminds us of Julia Kristeva’s psychoanalytic Zeitlosigkeit. This exploration yields fascinating results regarding the features of the South: the unapologetic tendency towards fusion with the other (human being, elements of nature) – another way of admitting the lack of ultimate control over things – the darkness of light where death presides over any construction of meaning, South and mourning as synonyms, and the persistence of Eros/love. Adding to sharpness of contrasts and to juxtaposition, which he also performs, as it were, Aranitsis draws our attention on one last, determining feature of the South: simultaneity. In the imaginary of the South, he seems to be saying, things are like this and like that at the same time and without this being specified, given that this is what the South is. No attempt at rationalisation is made. Sometimes, the artistic form naturally merges contradictions into one entity, such as in his dark light of the summer.

In all these singular works of art, the motor of the imaginary is the South. One could also turn this around and say: the South is a potent motor for the imaginary, and this is due to the fact that while eternity, immobility, immutability seem to be pervasive in the substance of the (imaginary) South, on the other hand, everything that is contradictory, fragmentary, simultaneous or juxtaposed in its form gives phantasy a push, which sets it off in another direction. Is this why Federico García Lorca calls the South an illusion (created by the mirror, etymologically: espejismo), a reflection, in the poem cited as a motto to this paper?  Is or can the South be or anything that reflects upon it? 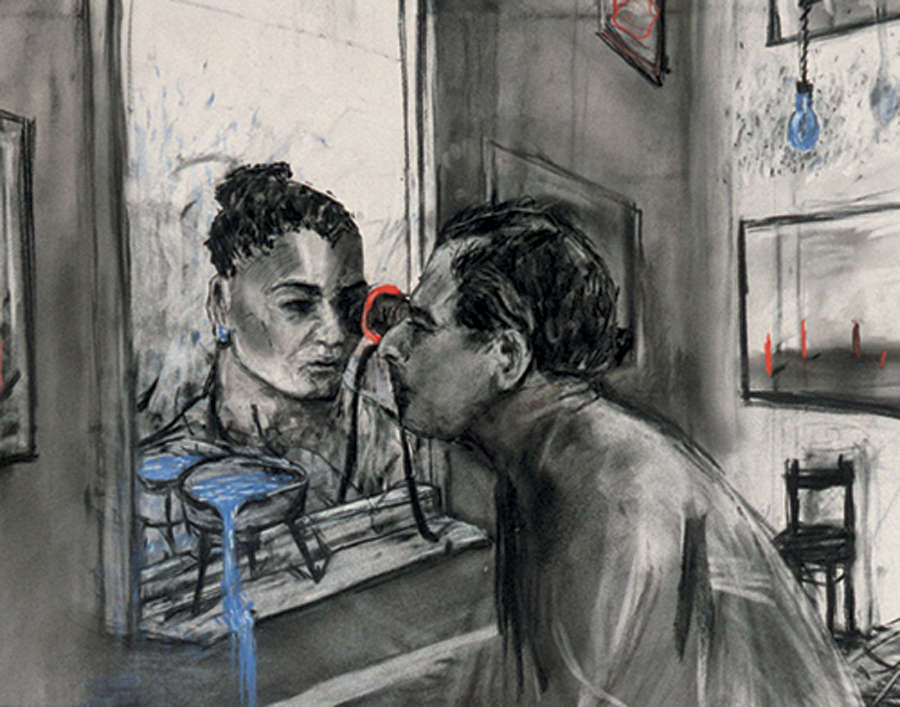 William Kentridge, still of Felix in Paris. I´ve kept notes of the epiphany that was being surrounded by Kentridge´s works in New York in 2001: the sense of homecoming, of relief

Of the Limit in Art: two lectures >