Solidarity has been a long-standing theoretical and practical concern and I´ve written several papers on it. Below, extracts from recent and  older ones (without footnotes).

a. Chains of Solidarity: Violence and Debt

In his famous ‘L´homme révolté’ , Albert Camus has an astonishing line: ‘je me révolte, donc nous sommes’: ‘I revolt, therefore we are’. In other words, the constitution of a collective ‘we’ is subsequent to the individual revolt. The interesting steps taken here concern, on the one hand, the step from the individual to the collective and, on the other hand, the relation between the action of revolt and the constitution of an identity; in other words: the origins of violence in the emergence of a collectivity. Let´s follow his text, which starts a page earlier than this line:

‘Human solidarity is based on the movement of revolt and this movement, in turn, finds its only justification in this complicity (…) every revolt which permits itself to negate or destroy this solidarity loses in that very moment the name of revolt and coincides with a murderous consentment. In the same way, this solidarity, outside of the field of the sacred, aquires life only at the level of revolt. The true drama of the revolted thought is then announced. To be, the human being must revolt, but its revolt must respect the limits that it discovers in itself and where human beings, coming together, start existing…In the experience of absurdity (the absurd), suffering is individual. From the moment of revolt, suffering gets a collective conscience, it becomes the adventure of all. Thus, the first progress of a spirit seized by estrangement is to recognise that it shares this estrangement with all human beings and that human reality, in its totality, suffers from this same distance to itself and to the world.´

Revolt is described by Camus as being founded on human solidarity,  the solidarity that unites all those who feel estranged – strangers to themselves and to the world. This solidarity is also called complicity, pointing to Freud´s fundamental idea in Totem and Taboo: that what holds society together is complicity in the common crime. Complicity, or guilt due to violence, is indeed the spring of solidarity, according to the Freudian account – and it points to Nietzsche´s well-known syllogism on the derivation of guilt from debt in the Genealogy of Morals.

Interestingly, however, complicity and revolt can also be thought of as distinct, if revolt is understood as an event which breaches the received account of time, history or the origins. In that case, the ‘way of living well’ together would be founded on a reconciliation between that breach in the narration and an uninterrupted flow of time. Commenting on Derrida´s Spectres of Marx, the historian of psychoanalysis Elisabeth Roudinesco, quotes the poet René Char: ‘notre héritage n´est précédé d´aucun testament´- our inheritance is not preceded by any testament. Breach caused by revolt and flow of the past into the present are upheld at the same time. Camus´warning of the de-coupling of revolt from solidarity, with its murderous undertones, may actually not have a different intention.

b. Multiple solidarities: autonomy and resistance

Three of the characteristics that have been ascribed to solidarity – reason, abstraction and equality – are more problematic than they would seem to be at first sight. Hannah Arendt, writing about the end of the 18th century, expresses with exemplary clarity that which we can now call the received 20th-century view of the concept. ‘It is out of pity that men are “attracted toward les hommes faibles”’, Arendt tells us, ‘but it is out of solidarity that they establish deliberately and, as it were, dispassionately a communityof interest with the oppressed and the exploited.’ ‘For solidarity’, she adds, ‘because it partakes of reason, and hence of generality, is able to comprehend a multitude conceptually, not only the multitude of a class or a nation or a people, but eventually all mankind.’

Thus, first, solidarity ‘partakes of reason’, it is beyond the realm of petty emotions or grand passions. The immediate objection to this sidestepping of emotions/passions as a component of solidarity is the historical difficulty one encounters in distinguishing several stages of nationalism (whose reasonableness laisse à désirer) from solidarity. Additionally, it is doubtful whether the normative exclusion of passions from debates on the social bond is fruitful in the context of a demand for the real possibility of dissent.

Second, intimately related to solidarity’s reason is its universalisation, as the extension of solidarity over class and nation to humanity (‘mankind’) pertains to the same characteristic, since the greatest possible ‘generality’ is achieved through reason. In contemporary thought, we can recognise the same idea in Jürgen Habermas’ ‘solidarity among strangers’, and in ‘the process of abstraction’ that allows him to view the passage from the European nation-states to the European polity as describing a contemporary need for an effort of the strictly same nature as that which had been made in the 19th century (Habermas 2001). Were such a contestable reading of history not accompanied by a substantive appeal for the politicisation of the European project, it would be as practically inoperative as Richard Rorty’s ‘human solidarity’ (Rorty, 1989).

Arendt continues by comparing solidarity, pity and compassion: ‘But this solidarity, though it may be aroused by suffering, is not guided by it, and it comprehends the strong and the rich no less than the weak and the poor; compared with the sentiment of pity, it may appear cold and abstract, for it remains committed to ‘ideas’ – to greatness, or honor, or dignity – rather than to any ‘love’ of men (…)But pity, in contrast to solidarity, does not look upon both fortune and misfortune, the strong and the weak with an equal eye… Terminologically speaking, solidarity is a principle that can inspire and guide action, compassion is one of the passions, and pity a sentiment’.

The third characteristic of solidarity that this conceptualisation proposes is the inclusion in the same community of the oppressed and the non-oppressed, the exploited and (one must surmise) the exploiting, the wealthy and the poor. Though there is no direct objection to be formulated here, it is worth noting that Arendt glosses over the one, fundamental, ambiguity of solidarity that becomes clear in her own text: that solidarity may well aim at overcoming inequality (as she wishes) but solidarity can exist only if there is inequality. Only if there are rich and poor can solidarity be inclusive; only if there are oppressed and their oppressors can there be a dispassionate community; only if there are less powerful and more powerful classes, can there be class solidarity.

The three features that are ascribed by the received view to solidarity recognisably place the concept in the context of modernity. However, first, the ‘context of modernity’ seems to be defined rather restrictively. If we adopt a broader understanding of modernity as a condition under which bonds are repetitively broken and made anew but with no strong substantive content, then we can bring our initial definition of solidarity close to this understanding. This also brings us to the idea of worldmaking, which, regardless of the world that is referred to, insists on its creation and, consequently, on  the possibility of changing it.

But, second, the rapprochement between modernity and solidarity does not seem inevitable and it shall remain open in this chapter. The levels of ambiguity involved, for instance, in the relation between solidarity and equality and in the relation between solidarity and dissent are witnesses to this lack of inevitability. Thus, the paradox of inequality is inescapably present both when solidarity is considered to be a description of the present (which always relies on a concept of the ‘traditional’ past), and when it is considered as a project of modernity. In the same way, while more often than not calls for solidarity insist on the existing present or past, and thus again, on a tradition or ‘acquis’ of solidarity, they fail to acknowledge that any normative call for solidarity must accept that it tends towards the overcoming of strife and thus acknowledge existing discord or inequality.3 While in both examples several distinct layers separate the two sides of the ‘paradoxes’ (analytic vs. normative, descriptive vs. ascriptive, past vs. present), I think they convincingly illustrate the central quality of solidarity as the recurrent specification of a certain type of bond.

in Karagiannis and Wagner, Varieties of World-Making. Beyond Globalisation, Liverpool: LUP, 2006

c. European Solidarity with ‘the Rest of the World’

The fate of dilemmas is that they cannot be fully resolved; the origins of any dilemmatic construction must be sought in the impression that the question it poses is one of obligatory choice between two options, neither of which is self-evident. The refusal of this obligatory choice entails showing that the dilemma quadilemma does not hold. In this respect, this paper does two things: it both uncovers a dilemmatic construction that remains implicit in the texts overviewed – and, therefore, makes a dilemma explicit – and rejects the dilemma as the wrong way of putting the issue.

Until now, however, the dilemma has remained implicit in the two main places where it appears: European Union (EU) policy discourse and political-philosophical discourse. The reasons for this implicitness range from neglect to uneasiness, but this paper is not centrally concerned with them. Rather, its central concern is the relative indeterminacy of ‘the rest of the world’ and the relative indeterminacy of the time for action, which this implicitness allows. The paper ultimately argues that these indeterminacies can be reduced by, first, inserting the solidarity of Europe with the rest of the world into a particular realm, that of the social, and by, second, articulating the relevance of the historical, colonial past of Europe for the future political project of Europe. 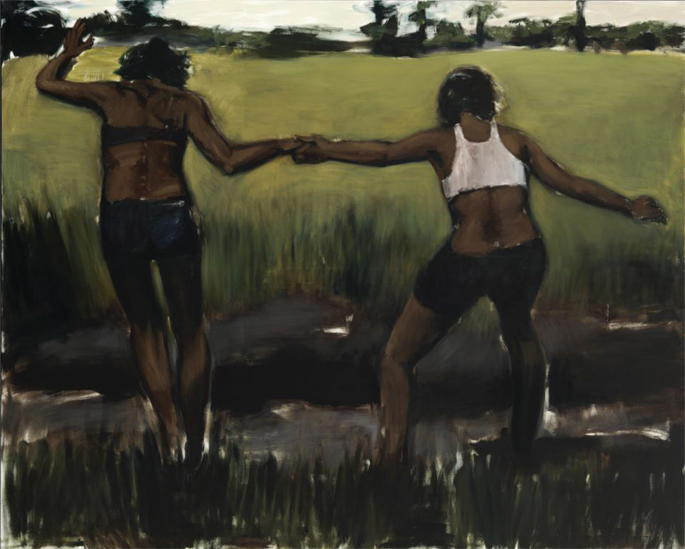 Lynette Yiadom Boakye, A Toast to the Health of, (2011) – one of the aspects that interested me in this picture is the undecidability of the gesture: are they preparing to jump or holding each other in equilibrium so as not to jump?