Of the Limit in Art: two lectures

Here are extracts in the form of notes that I took for two lectures I was invited to give at the University of Konstanz and at the German Institute of Art History in Paris. These lectures were most interesting to prepare – and I’ve kept here the notes-form for that reason.

a. ‘When the layers are meshed together on the loom of tapestry: of the limit in art’

A closer look throughout Bruce Bernard’s work reveals at least two ways of dealing with Lucian Freud’s work. One, more straightforward, is a monumental series of shots of the paintings as such, where the photo is a transparent tool, published in an impressive volume. The other, however, is a series of photos like the one used by Bonnie Honig on the cover of her Antigone Interrupted: there, Freud, along with, among others, his model Leigh Bowery, who happened to be the husband of Nicola Bateman, pose together in front of portraits of Bowery, ‘à la manière de’ Courbet’s studio, for instance. This second mode also encompasses photos of Freud´s portraits with their subjects but without the painter. The photo of the Courbet reference, however, is particularly striking: synagonism is here taking place not only synchronically between the photographer and the painter, but also synchronically between the painter and his model (Bowery being a preferred model for Freud, and an exhibitionist performer, fulfilling his own desire of letting himself be painted) and diachronically between Freud and Courbet and, I would add, also diachronically between Courbet (who paints the space and frames the limits of the object of art which is his painting of his studio) and Bernard (who frames the space of the photo of somebody else´s studio – which in the end is perhaps his, an itinerary studio).

Since I mention itinerarity (the itinerary studio – re Agnès Varda; incidentally, William Kentridge’s movement within the studio could be thought of as the reverse -) , let me say that a couple of weeks ago I watched Agnès Varda’s latest movie, which is a collaboration with JR, a young photographer whose work consists in collating photographic portraits he make in huge size on buildings accessible to the public gaze. At some point, Varda decides to – as she says – introduce women in a man’s world, the dockers’ world, where she was dragged. Once the three huge portraits are collated on a mountain of containers, she has the three chosen women sit each next to her portrait in the hole of a container. The effect is striking and it immediately brought to mind Nicola Bateman’s double portrait. Here too, one artist is shooting another artist’s portrait next to the model…

Finally, let me add – and this may not be the least important detail – that instead of being simply bereaved (as Bonnie Honig seems to suggest in her abovementioned book), Nicola Bateman has said in an interview that sitting for the portrait in Freud’s studio while Bowery was dying gave her ‘breathing space’. It is interesting not only to think how this contradicts and escapes theory’s efforts but also to observe reality’s agonistic rivalry with art and theory. In this respect, one can learn a lot from François Cheng´s The writing of Chinese poetry (…).

(…) A letter by Tacita Dean to Roni Horn for the exhibition ‘Roni Horn: Angie and Emily Dickinson’, says, referring to the occasion of a chance meeting in Venice Airport: ‘You said as a statement of fact, as I began breastfeeding my baby, that the first thing, which we all desire comes as a pair. I remember this because I thought it might offer me a clue as to your doubling and repetition. Two breasts, two ears, two eyes, two legs, two hands, two lungs, two kidneys, one brain, one mouth, one heart. Everything we thing, speak and feel we do in mono. Everything we see, hear and touch we do in stereo’.

If mono is autonomy, then what is stereo ie when you need two? What if one of the two does not work? Limp, half-blind? Then you’re liminal, both here and there, between two states, with a presence in both. Is that heteronomy? How about if one side is like this and the other side like that. In the documented preparation of Israel Galvan’s and Akram Khan’s duet show Torobaka, at one Akram Khan shows Israel Galvan a movement, saying: this arm hard, that arm soft).

Anothert kind of letter: an interview of Tacita Dean with Marina Warner, where they speak about Dean’s long-standing project on Antigone-Oedipus. Marina Warner says:

I don’t know if you know, but Carlo Ginsburg wrote a book called Ecstasies about witchcraft in Europe as a local form of knowledge, wisdom and healing, and he writes there that the shamans and all the carriers of wisdom would limp. If you had your foot in the other world or were able to cross into it, this was marked by limping. He calls it ‘asymmetrical deambulation’. Oedipus is also someone who is liminal, in both worlds. The swollen foot is the sign of a person who can live in two worlds.’

Do keep in mind the ecstasies: ex-stasis, outside of yourself or of this world, the other world is the sacred world (the excess of art), that which exceeds autonomy. Ι shall consider that the question of autonomy is the most pivotal one among those asked (the others being: practice, participation, inter-dependance, articulation) and this question raises the issue of law, and therefor the limit and that of transgression. I shall give a very straightforward definition of autonomy. It’ s Cornelius Castoriadis’s definition: giving oneself one´s own law and knowingthat one is giving it. This definition points – for him – to the contemporary emergence of democracy (the political), philosophy (critical thinking) and tragedy (the arts) in Ancient Athens. Widening this, we can think of autonomy as separation (separation from the Other, who/that gave one the Law). (…) 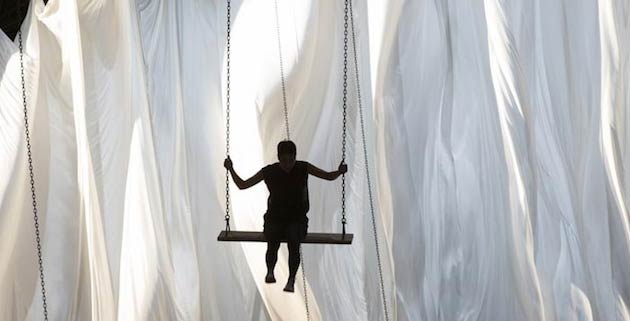 How I would have liked to be on that swing of Ann Hamilton´s The event of a thread ! – threads being what it´s all about in the extracts above