a. Democracy as a Tragic Regime

To see “democracy as a tragic regime”, as Cornelius Castoriadis did, is to recognize the ever-present risk of democracy’s cancellation, but it also means to emphasize the anti-democratic nature of such cancellation, thus its incompatibility with democracy. In the context of this understanding of democracy, the article takes the political to consist of those relations among people and among institutions within the polis, which aim at deciding the polis’ fate. It takes the social to be those relations among people and among institutions within the polis, to whom such decisions about the polis’ fate apply and whom they create. If democracy is understood as tension between the two, then the relation between those who decide and those who are the subject of the decision is never entirely pacified – hence, always contested and in need of specification. Using the examples of the state of exception and totalitarianism (temporary and permanent self-cancellation), the article argues that these situations are outside a linear continuation with the democratic phenomenon and are due to a displacement, which is akin to the hubristic displacement.

b. Democratic Surplus and Democracy-in-Failing

Among Hellenists who have had a close interest in democracy, the cancellation of democracy has perhaps not received the deserved conceptual attention and is more often treated as a historical process. In social and political theory, in turn, arguments as to the mortal perils that democracy faces, or closely related questions, abound. Briefly, we can distinguish three strands of such argumentation. The first strand runs along the lines: ‘democracy is not good enough’. This is an argument that can be found both on the Right and on the Left: on the Right, it will tend to take on the colours of lack of freedom; whilst on the Left, it will tend to bemoan inequalities and discriminations.  In more complex versions, like Castoriadis’, it will tend to regret lack of both collective and individual autonomy by resorting to topoi such as generalised conformism and populism (see, for instance, Castoriadis 1996a and b). This argument has some affinities with a debate that has recently emerged in the French context and that has uncovered a degeneration of democracy in the democratic experiences of the last years – and in particular in the social experiences of democracy. Jacques Rancière has dedicated an as usual incisive short book to this ‘anti-democratic’ wave, which exposes its great ambiguity as it at once bemoans the progressive ‘equalisation’ of conditions because of their populist or vulgar character and applauds wars conducted in the name of democracy (Rancière 2005: 10): the argument, recognisably if not always admittedly sourced in Aristotle’s schema of regimes and their degeneration, did not fail to be brought up every time the ancient Athenian democracy was in crisis.

The second strand argues that ‘democracy is not effective enough’. This is a straightforwardly conservative argument, even if it comes from people who consider themselves to be social-democrats such as Giandomenico Majone (1996) or Fritz Scharpf (1999). This argumentation tends to prefer efficiency, technicality and quickness of decision over debate. Though it has found some echoes among political-scientists and bureaucrats, this type of argument is negligent of the fundaments of what democracy means in that it restricts to a very small minority the decision-takers and may, at times, not even insist on representation but rather on expertise.

The third strand is also straightforwardly conservative: it aims at braking change. Albert Hirschman (1991: 7) has distinguished three topoi of the argumentation against democratic change: perversity, futility, jeopardy: ‘According to the perversity thesis, any purportive action to improve some feature of the political, social or economic order only serves to exacerbate the condition one wishes to remedy. The futility thesis holds that attempts at social transformation will be unavailing, that they will simply fail to “make a dent”. Finally, the jeopardy thesis argues that the cost of the proposed change or reform is too high as it endangers some previous, precious accomplishment.’ These are highly different ways of aiming at the same: impeding change. All three strands of argumentation implicitly address democracy’s end. The first two say: societies cannot change through conscious action, thus cancelling the fundamental idea of democracy, collective self-determination. The last one effectively argues for the cancellation of democracy by insisting that willed change, which is inherent in democracy, endangers democracy.

By contrast to what is proposed in this chapter, all of these ways of thinking the cancellation of democracy assume a direct (and sometimes even causal as in the case of the argument ‘too much democracy kills democracy’) link between democracy and its cancellation.

in The Trouble with Democracy, Edinburgh: EUP (Gerard Rosich and Peter Wagner eds.), 2016

(…) the ancient Greek political imaginary, by contrast to the modern one, translates into political institutions an insight that we here refer to as the tragic capture of the world. The tragic capture of the world is the coincidence of the wisdom that only the good life is worth living and of the intuition that death, whilst inexorable, must be avoided. The genre that the Greeks invented to present and communicate this understanding of the world is tragedy, even though there are tragic elements in the epos as well, as Castoriadis points out. Tragedy underlines the possibility – and even need – to act autonomously, but reminds the spectators that there are limits to autonomy, through the presentation of hubris and hubristic action. Castoriadis understands hubris not as arrogance or as the transcendence of well-defined limits, but as a space beyond limits in which all of a sudden one finds oneself. In other words, hubris cannot be foreseen; it cannot be avoided; it befalls one. The extreme pole of the limits recalled by tragedy is mortality/death.

At first sight, it appears as if tragic choices concern singular human beings, such as Antigone, even though the civic rules, may be one of the key elements at stake in the choice. This is true in so far as every choice is a choice that needs to be made by human beings. However, tragedy immediately addresses questions of the political, in particular under conditions of democracy in which human beings autonomously and togetherchoose their rules for living together.Tragedy springs from democracy, that is, tragedy is political and therefore democratic because it constantly reminds humans of the need to limit themselves and, more specifically, of this need’s radical expression: mortality.

It has often been observed that the genre of tragedy was historically born in democratic society, namely democratic Athens, because tragic choices require multiple possibilities of action and registers of justification – we will not explore this question further. Rather, the issue can be turned around in terms of exploring why and in which sense democracy is a tragic regime. As we have argued earlier, democracy is a regime that does not accept any norms from outside itself; it has to set its own norms. Thus emerges the possibility of hubris, which does not only presuppose freedom; it also presupposes the “absence of fixed norms, the fundamental imprecision of the ultimate reference-points of our actions. (…) There is no norm of the norm that would not ultimately be a historical creation. And there is no means to eliminate the risk of a collective hubris. No one can protect humanity from madness or suicide.” Facing persistent uncertainty, indeed often indeterminacy, about the appropriate action to take, democracy is always at risk – at risk of making an inappropriate choice, and more radically, at risk of self-revocation or self-destruction as a consequence of such choices. That such risk can become reality is shown by the decline and fall of the Athenian polis at the end of the fifth century. Thus, the situation of action in democracy mirrors for a collectivity that which a singular human being faces in tragic theatre: the simultaneous existence of different sets of criteria for good action, the lack of criteria for determining the distinction between them, and the need to act under conditions of such uncertainty and indeterminacy.

Taking a second look at the two other questions by Kant, which Castoriadis does not conceptualise as answerable in a specific Greek way, we can propose traces of a Greek answer that both Castoriadis and we need in order to arrive at the tragic capture of the world. Clearly, like in Kant, these two questions – what do I know? what ought I to do? – are answered by reference to the principle of autonomy, but in highly different ways in two respects. First, there is no sense in which these questions could be asked and answered by an individual on his or her own in ancient Greece. The human being – as Castoriadis, too, would insist – is always a being in society. Thus, these questions are answered with reference to the collectivity of which one is a member: what do we know, what ought we to do? Secondly, while Kant saw a need to introduce “reason” as that second principle that limits and frames the workings of autonomy, ancient Greek thinkers, while well aware of the question whether there are limitations, by and large rejected the adoption of any such second principle.Where Kant was employing reason as a means to restrain the working of the imagination (from which reason itself sprang), the power of imagination is accepted as the source of creation and innovation, and thus the potential for solutions to problems of living-together in ancient Greece.

with Peter Wagner, in Critical Horizons

on Castoriadis and Axelos journals.sagepub.com 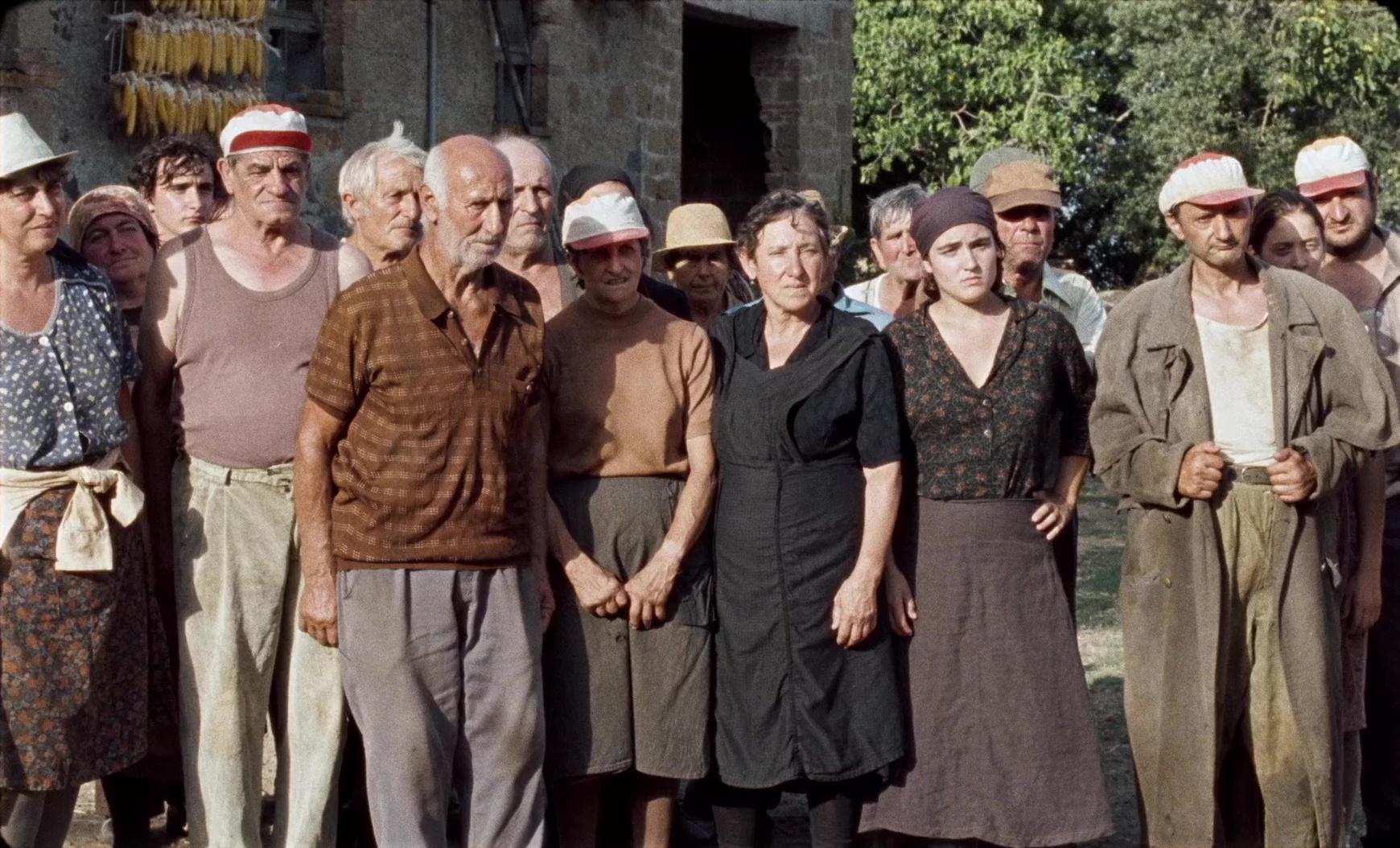 still from Lazzaro Felice, in which Alice Rohrwacher poetically depicts the end of feudalism